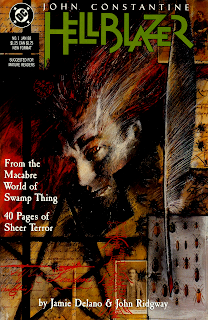 John Constantine is a character who emerged from DC's Swamp Thing. The Hellblazer series in which Contantine in the principal character begins with a newspaper clipping which depicts him as a man who knows things and has connections in a number of places. As the first 10 issues progress, you learn a little more about Constantine's connections among the rich and famous as well as the dark and magical. His circle of influence extends into hell itself. He really is a compelling character if for no other reason than the fact that he appears to have achieved true moral ambivalence.

The storylines in Hellblazer go every which way. Constantine's services are needed by a variety of different people, and they are employed in a number of different ways. Unlike my gripe with the first 10 issues of Doctor Strange (that they presented a magical world which sometimes seemed to have rules and limitations and at other times appeared to have none), Hellblazer seems to have very strict rules for its magical world, but there's no way you could understand them from the first 10 issues alone. While definitely intriguing, I'm not sure Hellblazer is going to rate very high on the list of comic book series I intend to read next simply as a matter of personal taste. I can appreciate the quality of this series, but that doesn't mean I love it more than Marvel comics of the 1960's. Remember, this is a list of the order I'd like to read these series in, not a ranking of their overall quality (though the two are related). Here's where Hellblazer falls: