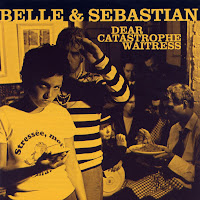 Dear Catastrophe Waitress is the rebirth of Belle and Sebastian. They laid their wistful If You're Feeling Sinister ways by the wayside and sprouted new innuendo-laden slightly harder rocking wings.

The album begins with the greatest innuendo-filled track in the world (yes, it's even better than "Big Balls" by AC/DC, which takes the respectable silver medal in this category) in "Step Into My Office, Baby." I have listened to that one song more than 100 times and the jokes still haven't gotten old. It is a masterpiece of high art with low brows. This ain't your older brother's (you know the one, he was into all the right things in the mid 90's) Belle and Sebastian.

While this album is a lot more fun than Fold Your Hands Child, You Walk Like a Peasant and The Boy With the Arab Strap (I'm thinking specifically of the allegations of homosexuality in "Piazza, New York Catcher." I still like to think that Piazza is gay, even though he denies it) it's also objectively better than those two albums. The uniformity of vision from from song to song is astonishing, which is only bolstered by the lyrical depth of each song. This is just a great album regardless of what else it means for Belle and Sebastian and their career.

Baleeted? No. Both my inner adult and my inner juvenile love this album.