Belle and Sebastian - Dog on Wheels 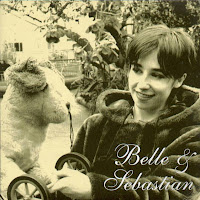 When you look at Belle and Sebastian's LP and EP output, it becomes clear that they don't sit on good ideas for very long. If they have something worth hearing, they put it out. That's pretty much how they became one of the greatest indie bands ever.

Dog on Wheels is a fine example of how Belle and Sebastian's EP output is almost as vital and important to own as their LP output. The real gem of this album is "Belle and Sebastian" which, in addition to being a very fine tune, does precisely what "They Might Be Giants" did for They Might Be Giants. It's not a theme song for the band, but it's as close as you'll come.

Baleeted? The box says no. Also, that's a Homestar/Futurama mashup.