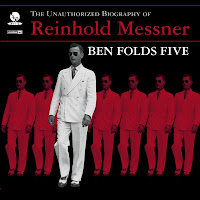 While Ben Folds Five has never had a tendency to lay back in the groove, this is the album where they really went for grandiosity, which I mean in the complimentary, not the pejorative. I simply mean to say that everything on this album feels bigger. Bigger swells, bigger orchestral arrangements, bigger chords requiring more fingers than ever before (I still have to fact-check that last one, so don't quote me on it).

The one thing I don't like about this album is that it feels like Ben Folds trying to tell me that he's smarter than I am. There's no question that he actually is smarter, but I don't want to be reminded of that fact. Even so, there are a number of very good tunes. I especially like "Don't Change Your Plans," which feels like a Bacharach song.

Baleeted? No, but on an unrelated note, the cover art for this album makes me anxious for some reason.