Ben Folds Five - Whatever and Ever Amen 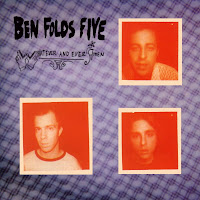 This album is jaunty and timeless. Oh, and it has an all-time megahit that despite whatever you tell yourself, it is actually about abortion.

The 90's was a time when albums met controversy for a number of ridiculous reasons (stores wanted to boycott Goo Goo Dolls' Boy Named Goo because the naked boy on the cover standing in front of a grape vine with grape smears all over his face looked like a cannibal to the insane people who protest such things. In short, Goo Goo Dolls want your children to eat people. It's in their music and everything) but "Brick" had a legitimate reason for controversy. 40 years have passed since Roe v. Wade and abortion is still one of the most divisive topics available. People actually vote for soulless morons because they agree with their stance on abortion. I'm telling you this because people can't stop loving "Brick" even if they don't agree with its content at the very core of their being. It's that good of a song.

There are other songs on this album as well. They are all amazing. On the expanded version there is a cover of "She Don't Use Jelly" that I actually prefer to the Flaming Lips original. Ben Folds is amazing. The two other guys in the five aren't bad either.

Baleeted? No. Not until I really nail down my complex feelings surrounding "Brick."