Belle and Sebastian - Fold Your Hands Child, You Walk Like a Peasant 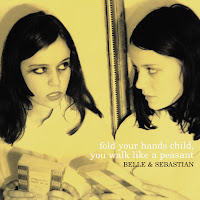 An indie friend of mine - you might even say she's my most indie friend - told me on more than one occasion that this is her very favorite Belle and Sebastian album. If I had to guess, I would say that more than half of her delight in this album comes from the title alone. The actual music on this album is a much larger evolutionary step backward from the greatness of If You're Feeling Sinister than The Boy With the Arab Strap was.

"I Fought in a War" kicks of the album with a flourish. It's in the same realm of greatness as "Dylan in the Movies." "The Model," which follows, is almost as good as the opener, and it holds the promise of many great things to come. Unfortunately, those are the two best songs on the album, and the song which immediately follows them, "Beyond the Sunrise" is both boring and baffling. There are a few other mildly enjoyable tracks on this album, but given Belle and Sebastian's track record with awesomeness, Fold Your Hands Child, You Walk Like a Peasant feels like a disappointment.

Baleeted? No, but mainly because I like having lots of Belle and Sebastian albums.