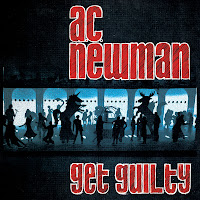 You may know A.C. Newman as the driving force behind the indie supergroup The New Pornographers. If you're a power pop nerd, you may remember him from the underrated Zumpano. Regardless of where you do or don't know the man, A.C. Newman has some serious songwriting chops, which come through on Get Guilty, Newman's second solo release.

I would describe Newman as something of a tinkerer when it comes to the songs he writes and the way he performs them. While he could easily play a straight 3 minute pop ditty, he rarely plays anything straight. Just listen to the number of changes in a song like "Submarines of Stockholm." It's full of stops, starts, and tempo changes, and includes more than a few non-standard instruments, by which I mean something other than guitar/bass/drums. From everything I've heard, A.C. Newman isn't satisfied with perfectly normal. He likes to kick things around a bit and make them a little more unique. Get Guilty is as fine a set of indie pop tunes as you're likely to find anywhere.

Baleeted? No. You never delete anything A.C. Newman is involved in. You just don't.