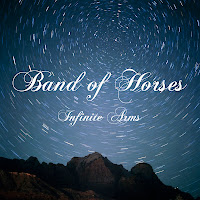 In addition to the thickness of the sound itself, this album brings a greater variety of genres into the mix. The second song, "Compliments" is an almost straight forward rocker. "Blue Bird" manages to sound both like a 1970s AM radio tune, and a modern indie track at the same time. The title track is Nick Drake-ish folk. "Dilly" is practically a Killers song. "Older" is an old-timey country tune. Ever single track is distinctive.

Because it's a little more diverse, Infinite Arms is also slightly less cohesive than the previous two Band of Horses albums, but that doesn't mean it isn't enjoyable from top to bottom. This is a solid album by one of the best bands in the business.

Baleeted? No. I love Band of Horses too much.