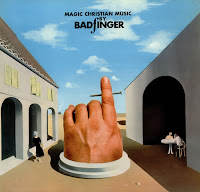 Everybody knows that Badfinger is a hard luck case as a band. Because they sounded Beatle-ish and were the first non-Beatle band to sign to The Beatles Apple Records label, which is not to even mention the fact that their first hit was penned by McCartney, they got to live in the shadow of The Beatles. Also, they had a horrible manager who stole their money, a butt ton of lawsuits throughout their career, a lot of infighting among the individual band members, and they all got to deal with the suicide of the band's best songwriter, Pete Ham. Oh, and I don't think they've ever really ascended to their proper place in rock history, given the large number of great tunes they created. Let this be the last time we mention the band's sad story (and it really is sad) because what gets lost in bemoaning the band's many misfortunes is the fact that their music is fantastic. Sure, they could've made more money and gotten more critical acclaim, but that's true of a lot of bands. Let's not let the tragedy overshadow the triumphs.

It's easy to write Magic Christian Music off as a hodgepodge because it wasn't conceived as a solitary album. It features cuts from the band's contribution to the soundtrack of the film The Magic Christian, as well as tunes from Bandfinger's previous incarnation The Iveys, in addition to a few cuts created especially for this album. You would expect such an album to be some sort of unholy mess, but Badfinger always delivers tight pop tunes, which blend perfectly with all the other tight pop tunes. Just listen to "Dear Angie" or "Beautiful and Blue" and you'll get it.

Baleeted? Never. Badfinger is too awesome, even at their least cohesive.