A.C. Newman - Shut Down the Streets 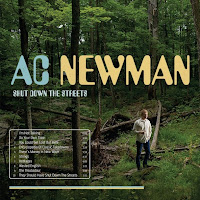 Shut Down the Streets is yet another fine outing by A.C. Newman, an indie rock icon if ever there was one (And was there one? Does that run counter to the very notion of indie or does it even matter now that indie has been bought up by the major labels? At any rate, keep tagging your mp3's "131" in the genre tab because that's how we stick it to the man who pressed and promoted the records that we use to stick it to him).

While Get Guilty was a bit prickly and rock-ish, Shut Down the Streets is a little more ethereal in its approach and electronic in its instrumentation. As always, the songs are constructed of only the finest materials and performed by people who seem to know what they are doing. As it has ever been, I tend to enjoy the spaces where synths meet guitars, and there is plenty of that on this album. Highly recommended are "You Could Get Lost out Here" and "There's Money in New Wave."

Baleeted? Not while A.C. Newman keeps being awesome.