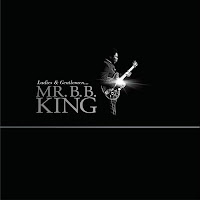 B.B. King will always be something special for my wife and I. It was at a B.B. King concert that we began to plan our wedding, and our life together. Also, during the concert, B.B. King told us to kiss, which was fun. We thought we were in for an evening of blues, but we ended up with a life-altering experience which, admittedly, did not need the concert in order to occur, but that's where it did occur, so B.B. King holds an honored place in our lives. Just for the record, I was a fan before the show.

Anyway, personal connection aside, this box set is an unbelievably thorough exploration of B.B. King's career. Its 10 discs will take you from scratchy recordings from the late 1940s to the much cleaner recordings which feature collaborations with Eric Clapton and other luminaries. As you follow the chronological arc of this set (each of the 10 discs covers a 5 to 8 year chunk of King's career), you get a sense for not only the evolution of B.B. King as a musician, but also for the evolution of the blues as a genre. While this set is absolutely overkill for casual fans, it's a highly worthwhile purchase for those of us who are interested in a comprehensive overview of the man's career. By the time I polished off the final disc, it was almost too much. I was right on the verge of a blues breaking point (and no, John Mayall was not involved). This is a decadently definitive compilation, so if that sounds like your bag, get this.

Baleeted? No. These tunes take me back to a special place. You can't delete that.