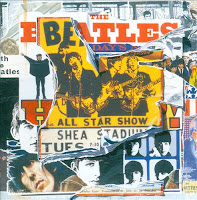 I stole this album back when I had a problem with kleptomania. I took it because I wanted to own some Beatles and I thought the anthology albums would be greatest hits compilations, and not piles of discarded tape spliced back together for people who want to hear absolutely everything the band ever did.

It was this album which drew me to Revolver, so I guess I owe it some acknowledgement. There is a version of "And Your Bird Can Sing" on this album in which two of the guys in the band can't stop laughing. It ruins an otherwise beautiful song. Because I simply needed to own the fully-realized version of this song, I went out and bought (yes, I paid money for this one) Revolver, which became my favorite Beatles album at the tender age of 15. Little did I realize how smart I was. All my friends loved The White Album because they had a strange fascination with "Ob-La-Di, Ob-La-Da." History has been much kinder to me and my love of Revolver.

Anyway, as with the other anthology albums, Anthology 2 inspired me to seek out The Beatles' studio albums. There is nothing in the anthologies that isn't better on the studio albums. Trust me.

Baleeted? No. If for no other reason than the fact this album reminds me of how I found Revolver.